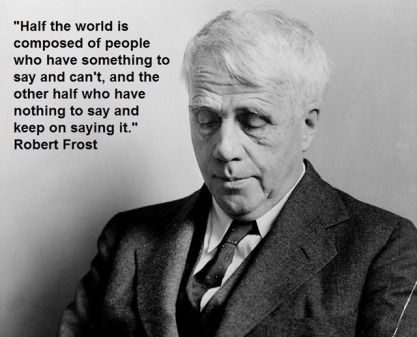 Such a true quote!

Robert Lee Frost (March 26, 1874 – January 29, 1963) was an American poet. His work was initially published in England before it was published in America. Known for his realistic depictions of rural life and his command of American colloquial speech, Frost frequently wrote about settings from rural life in New England in the early twentieth century, using them to examine complex social and philosophical themes.

Frost was honored frequently during his lifetime and is the only poet to receive four Pulitzer Prizes for Poetry. He became one of America’s rare “public literary figures, almost an artistic institution.” He was awarded the Congressional Gold Medal in 1960 for his poetic works. On July 22, 1961, Frost was named poet laureate of Vermont.

This is a short biography on this amazing poet.  For more information and to read his full biography, please visit the link below.

Whose woods these are I think I know.
His house is in the village, though;
He will not see me stopping here
To watch his woods fill up with snow.

My little horse must think it queer
To stop without a farmhouse near
Between the woods and frozen lake
The darkest evening of the year.

He gives his harness bells a shake
To ask if there is some mistake.
The only other sound’s the sweep
Of easy wind and downy flake.

The Road Not Taken –

Two roads diverged in a yellow wood,
And sorry I could not travel both
And be one traveler, long I stood
And looked down one as far as I could
To where it bent in the undergrowth;

Then took the other, as just as fair,
And having perhaps the better claim
Because it was grassy and wanted wear,
Though as for that the passing there
Had worn them really about the same,

And both that morning equally lay
In leaves no step had trodden black.
Oh, I kept the first for another day!
Yet knowing how way leads on to way
I doubted if I should ever come back.

I shall be telling this with a sigh
Somewhere ages and ages hence:
Two roads diverged in a wood, and I,
I took the one less traveled by,
And that has made all the difference.

Nothing Gold Can Stay –

Nature’s first green is gold,
Her hardest hue to hold.
Her early leaf’s a flower;
But only so an hour.
Then leaf subsides to leaf,
So Eden sank to grief,
So dawn goes down to day
Nothing gold can stay.