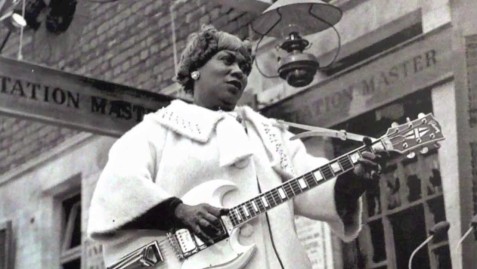 If there was ever a person that was born with a guitar in their hand, people would honestly think it was Rosetta Tharpe. A natural guitar player and incredible Gospel, Blues and Rock and Roll singer. This woman put the rock and the roll in music. As you watch the videos of Ms. Tharpe playing, you can see her looking up as many have stated that she would look up at the sky as if giving thanks to God. She has influenced many artists of her era and is still influencing artists in present day!
Sister Rosetta Tharpe (March 20, 1915 – October 9, 1973) was an American singer, songwriter, guitarist, and recording artist. She attained popularity in the 1930s and 1940s with her gospel recordings, characterized by a unique mixture of spiritual lyrics and rhythmic accompaniment that was a precursor of rock and roll. She was the first great recording star of gospel music and among the first gospel musicians to appeal to rhythm-and-blues and rock-and-roll audiences, later being referred to as “the original soul sister” and “the Godmother of rock and roll”. She influenced early rock-and-roll musicians, including Little Richard, Johnny Cash, Carl Perkins, Chuck Berry, Elvis Presley and Jerry Lee Lewis.

Tharpe was a pioneer in her guitar technique; she was among the first popular recording artists to use heavy distortion on her electric guitar, presaging the rise of electric blues. Her guitar playing technique had a profound influence on the development of British blues in the 1960s; in particular a European tour with Muddy Waters in 1964 with a stop in Manchester on 7 May is cited by prominent British guitarists such as Eric Clapton, Jeff Beck, and Keith Richards.

Willing to cross the line between sacred and secular by performing her music of “light” in the “darkness” of nightclubs and concert halls with big bands behind her, Tharpe pushed spiritual music into the mainstream and helped pioneer the rise of pop-gospel, beginning in 1938 with the recording “Rock Me” and with her 1939 hit “This Train” Her unique music left a lasting mark on more conventional gospel artists such as Ira Tucker, Sr., of the Dixie Hummingbirds. While she offended some conservative churchgoers with her forays into the pop world, she never left gospel music.

Tharpe’s 1944 release “Down by the Riverside” was selected for the National Recording Registry of the U.S. Library of Congress in 2004, which noted that it “captures her spirited guitar playing and unique vocal style, demonstrating clearly her influence on early rhythm-and-blues performers” and cited her influence on “many gospel, jazz, and rock artists”. (“Down by the Riverside” was recorded by Tharpe on December 2, 1948, in New York City, and issued as Decca single 48106.) Her 1945 hit “Strange Things Happening Every Day”, recorded in late 1944, featured Tharpe’s vocals and electric guitar, with Sammy Price (piano), bass and drums. It was the first gospel record to cross over, hitting no. 2 on the Billboard “race records” chart, the term then used for what later became the R&B chart, in April 1945. The recording has been cited as a precursor of rock and roll. On December 13, 2017, Tharpe was chosen for induction into the Rock and Roll Hall of Fame as an Early Influence.

Tharpe’s guitar style blended melody-driven urban blues with traditional folk arrangements and incorporated a pulsating swing that was a precursor of rock and roll.

Little Richard referred to the stomping, shouting, gospel music performer as his favorite singer when he was a child. In 1947, she heard Richard sing before her concert at the Macon City Auditorium and later invited him on stage to sing with her; it was Richard’s first public performance outside of the church. Following the show, she paid him for his performance, which inspired him to become a performer. When Johnny Cash gave his induction speech at the Rock n Roll Hall of Fame, he referred to Tharpe as his favorite singer when he was a child. His daughter Rosanne Cash stated in an interview with Larry King that Tharpe was her father’s favorite singer. Tharpe began recording with electric guitar in the 1940s, with “That’s All”, which has been cited as an influence on Chuck Berry and Elvis Presley. Other musicians, including Aretha Franklin, Jerry Lee Lewis and Isaac Hayes, have identified her singing, guitar playing, and showmanship as an important influence on them. She was held in particularly high esteem by UK jazz/blues singer George Melly. Tina Turner credits Tharpe, along with Mahalia Jackson, as an early musical influence. Such diverse performers as Meat Loaf, Neil Sedaka and Karen Carpenter have attested to the influence of Tharpe in the rhythmic energy she emanated in her performances (Carpenter’s drum fills are especially reminiscent of Tharpe’s “Chorlton Chug”).

In 2018 singer Frank Turner wrote and performed the song “Sister Rosetta” about her influence and how she deserved to be in the Rock and Roll Hall of Fame. The single was released on July 3, 2019.

12 thoughts on “The Mother of Rock and Roll, “Sister Rosetta Tharpe!””