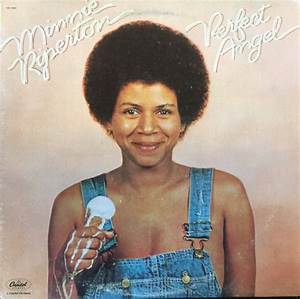 I have always loved Minnie Riperton in fact my friends and I have tried numerous times to train our voices to match her five-octave coloratura soprano range. Ha Ha…I will never be able to sing as she did, and none of my friends were successful either, but we sure do enjoy her songs and this one is one of the most beautifully written songs that a husband and wife could sit down and write together. One of the sweet things about the song according to the liner notes from Riperton’s Petals compilation CD, the melody to “Lovin’ You” was created as a distraction for Maya when she was a baby so Riperton and Richard Rudolph could spend time together.[4] Minnie is also widely known for her use of the whistle register and has been referred to by the media as the “Queen of the whistle register”.

Riperton wrote this with her husband, Richard Rudolph. Maya Rudolph of Saturday Night Live is their daughter, and Riperton mentions her in the lyrics. In the end, she sings “Ma-ah-aha-aha-ah-ya.” >

Riperton worked with Stevie Wonder as a backup singer, and Stevie produced this track for her. Due to contractual obligations, Wonder’s name could not appear on the credits, so he’s listed as “Black Bull Productions” (Wonder’s zodiac sign is Taurus, thus the bull).

Around 2000, this was featured in two commercials that gave it a renewed popularity. It was used in a Burger King commercial as well as a spot for Visa. In the Visa commercial, the guy in charge of music during Pittsburgh Steelers football games tries to buy “Who Let The Dogs Out,” but is denied because the music store won’t take his check. Since he doesn’t have a Visa check card, he is forced to play this during the game, which does not go over well with the players or crowd.

Riperton died of cancer in 1979 at age 31. While this was her only hit, she was held in high regard in the music community.

This was featured in the 1997 movie Vegas Vacation. Vegas superstar Wayne Newton sings it with Beverly D’Angelo at one of his shows. >>

Eddie Murphy’s character sings this in the movie The Nutty Professor. The high-pitched “wailing” part at the end of the chorus is performed by a crude comedian (played by Dave Chapelle), who lets out a cry of pain as he has his fingers crushed in a piano by Murphy, as part of an attempt to shut him up and appease the crowd he has been tormenting with mean jokes at a comedy club. >>

The song was covered in 2003 by Marc et Claude, an electronic production duo based in Monchengladbach, Germany. Their techno version reached #37 in the UK.

3 thoughts on “Minnie Riperton – Lovin’ You”