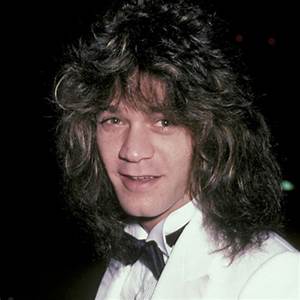 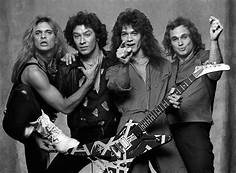 The band “Van Halen” was a huge part of my teenage years. I don’t have cool stories of going to any of their concerts as most people do, but I can say with all honesty that they were a huge part of the teen years, not only of mine but many of the people I grew up with. It’s sad to have to say goodbye to Eddie, but I am so happy he is leaving us a huge collection of some of the greatest music of all time. R.I.P., Eddie, and Rock On!

Edward Lodewijk “Eddie” Van Halen (Dutch: [ˈɛdʋart ˈloːdəˌʋɛi̯k fɑn ˈɦaːlə(n)], /væn ˈheɪlɛn/ van HAY-len; January 26, 1955 – October 6, 2020) was an American musician, songwriter, producer, and inventor. He was the main songwriter and lead guitarist of the American rock band Van Halen, which he co-founded in 1972 with his brother, drummer Alex Van Halen, bassist Mark Stone, and singer David Lee Roth. He was well known for popularizing the tapping guitar solo technique, allowing rapid arpeggios to be played with two hands on the fretboard. In 2012, he was voted number one in a Guitar World magazine reader’s poll for “The 100 Greatest Guitarists of All Time”.

Eddie and his brother Alex formed a band in 1972. Two years later, the band changed its name to “Van Halen” and, at the same time, became a staple of the Los Angeles music scene while playing at well-known clubs like the Whisky a Go-Go.  In 1977, Warner Records offered Van Halen a recording contract.

Upon its release, the band’s album Van Halen reached number 19 on the Billboard pop music charts, becoming one of rock’s most commercially successful debuts. It was highly regarded as both heavy metal and hard rock album. By the early 1980s, Van Halen was one of the most successful rock acts of the time. The album 1984 went five-times platinum a year after its release. The lead single “Jump” became the band’s first and only number-one pop hit and garnered them a Grammy nomination.

The band won the 1992 Grammy Award for Best Hard Rock Performance with Vocals for the album For Unlawful Carnal Knowledge. In 2019, the band ranked 20th on the RIAA list of best-selling artists with 56 million album sales in the United States and more than 80 million worldwide. Additionally, Van Halen charted 13 number-one hits in the history of Billboard‘s Mainstream Rock chart; meanwhile, VH1 ranked the band seventh on a list of the top 100 hard rock artists of all time and, in 2007, Van Halen was inducted into the Rock and Roll Hall of Fame. Individually, Eddie received acclaim for his guitar work in the band.

Eddie engaged in several projects outside of his eponymous band, including solo work and partnerships with his brother on film soundtracks (such as The Wild Life, Twister, and a pornographic film) as well as musical collaborations with Kiss bassist Gene Simmons, Nicolette Larson, Michael Jackson, Brian May, Sammy Hagar, Black Sabbath, Roger Waters, Toto guitarist Steve Lukather, and LL Cool J. In addition, Eddie made cameo appearances in the music video for Frank Sinatra‘s “L.A. Is My Lady” and an episode of Two and a Half Men.

Eddie was also an inventor on three patents related to guitars: a folding prop to support a guitar in a flat position, a tension-adjusting tailpiece, and an ornamental design for a headstock. 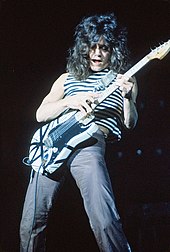 Eddie’s 1978 instrumental solo “Eruption“, which was voted number 2 in Guitar World‘s readers poll of the “100 Greatest Guitar Solos”, showcased a solo technique called tapping, using both left and right hands on the guitar neck. Although he popularized tapping, he did not invent the tapping technique, which had been used by flamenco guitarists for at least a century, as well as the likes of Western virtuosos like Paganini on both violin and guitar. According to MusicRadar, Steve Hackett – lead guitarist with Genesis in the 1970s – is “widely credited with inventing two-handed tapping” and was an influence on Eddie. When asked about this, Hackett said, “Eddie and I have never spoken about it, but yes, he has credited me with tapping… Eddie is a fine player, of course, and he’s the one who named the technique.”

George Lynch said in an interview that he and Eddie saw Harvey Mandel tap at the Starwood in the 1970s. Eddie named Jimmy Page of Led Zeppelin as an influence, saying in one interview with Guitar World:

I think I got the idea of tapping watching Jimmy Page do his “Heartbreaker” solo back in 1971. He was doing a pull-off to an open string, and I thought wait a minute, open string … pull off. I can do that, but what if I use my finger as the nut and move it around? I just kind of took it and ran with it.

Until it expired in 2005, Eddie held a patent for a flip-out support device that attaches to the rear of the electric guitar. This device enables the user to employ the tapping technique by playing the guitar in a manner similar to the piano with the face of the guitar-oriented upward instead of forward. 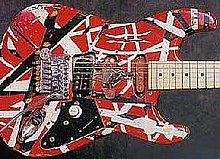 Eddie used custom equipment throughout his career. His original choice of the guitar was a Gibson Les Paul, which he replaced the original P90 pickup on the bridge with a humbucker in order to sound like Eric Clapton. He is most associated with the Frankenstrat, a custom guitar he built from parts. The ash body and maple neck cost $130, while the body was bought for $50 as the wood had a knot in it. The tremolo arm was originally taken from a 1958 Fender Stratocaster and was later replaced with a Floyd Rose arm. The guitar had a single Gibson PAF (patent applied for) bridge pickup from a Gibson ES-335, which he enclosed with paraffin wax to prevent feedback. The Frankenstrat was originally painted black but was recoated with Schwinn red bicycle paint in 1979.

Eddie used a variety of pickups including 1970s Mighty Mites, which were made by Seymour Duncan and were copies of DiMarzio Super Distortion pickups. Eddie also used Gibson PAFs, one of which was rewound by Seymour Duncan in 1978.

In an interview with Guitar World in 1985, Eddie stated that his guitar sound style which he called “brown sound” is “…basically a tone, a feeling that I’m always working at … It comes from the person. If the person doesn’t even know what that type of tone I’m talking about is, they can’t really work towards it, can they?” In an interview with Billboard magazine in June 2015, he stated that with the expression “brown sound” he actually tried to describe the sound of his brother Alex’s snare drum, which he thought “…sounds like he’s beating on a log. It’s very organic. So it wasn’t my brown sound. It was Alex’s.” 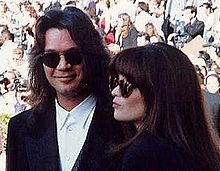 Eddie Van Halen and Valerie Bertinelli at the 1993 Emmy Awards

In 1980, Van Halen met actress Valerie Bertinelli at a Van Halen concert in Shreveport, Louisiana. They married in California a year later and had one son, Wolfgang. In 2005, Bertinelli filed for divorce in Los Angeles after four years of separation. The divorce was finalized in 2007.

The following year, Eddie proposed to his girlfriend, Janie Liszewski, an actress and stuntwoman who was Van Halen’s publicist at the time. The two married in 2009, at his Studio City estate, with his son Wolfgang and ex-wife Bertinelli in attendance.

Van Halen struggled with alcoholism and drug abuse. He began smoking and drinking at the age of 12, and he stated that he eventually needed alcohol to function. He entered rehabilitation in 2007 and later shared in an interview that he had been sober since 2008.

Suffering from lingering injuries from past, high-risk, acrobatic stage performances and crashes, Van Halen underwent hip replacement surgery in 1999, after his chronic avascular necrosis, with which he was diagnosed in 1995, became unbearable. He began receiving treatment for tongue cancer in 2000. The subsequent surgery removed roughly a third of his tongue. He was declared cancer-free in 2002. He blamed the tongue cancer on his habit of holding guitar picks in his mouth, stating in 2015: “I used metal picks – they’re brass and copper – which I always held in my mouth, in the exact place where I got the tongue cancer. … I mean, I was smoking and doing a lot of drugs and a lot of everything. But at the same time, my lungs are totally clear. This is just my own theory, but the doctors say it’s possible.”

In 2012, Van Halen underwent emergency surgery for a severe bout of diverticulitis. Recovery time required due to the surgery led to the postponement of Van Halen tour dates scheduled in Japan. Van Halen was later hospitalized in 2019 after battling throat cancer over the previous five years. He died from the illness on October 6, 2020, at the age of 65.

5 thoughts on “Edward Lodewijk “Eddie” Van Halen – The Man Behind the Band, “Van Halen” & One of the Greatest Guitar Players of All Time”